The world is depending more and more on mobile devices for its computational tasks. The mobile revolution has touched every technological facet and keeps moving at a fast pace with no sign of slowing down. Recently,  there has been an introduction of a new category of devices known as wearables. These devices are in the form of eye glasses, watches, wrist bands and even clothes but they have smart electronics devices built into them. Taking a page from the book of wearable devices, this project aims to create a medical device capable of continuous monitoring of a patients heart rate and body temperature throughout a day while allowing the patient go about his other daily business. The project is a mobile device that can be worn around the wrist or arm; having integrated electronic sensors that can read body temperature as well as heart rate. The device logs this data in its memory at regular intervals. When tethered to a computer system via USB port, real-time body temperature and heart rate can be displayed on the computer screen. Also, logged data in the device memory can be read and analyzed on the computer. This data can then be saved on the computer for future reference. The project is built around a microcontroller, LCD display, LED and LDR, push buttons as well as other electronics components. Owing to the complexity of the project, the firmware is written in ANSI C and includes a full USB software stack for USB communication device class interface. 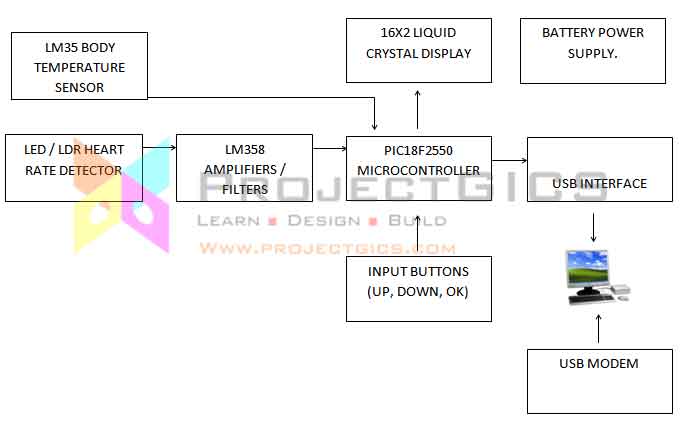 Block diagram of the body temperature and heart rate monitor

From the above block diagram a list of the circuit modules can be compiled as follows:

The functions of the listed modules and how they influence the overall operation of the project will be explained one at a time.

The project is battery powered. A nine volts battery supplies the required power to the circuit components of the hardware. Due to the critical power requirements of the digital circuit components used, a regulated five volts source is paramount. This is achieved by using a fixed-voltage regulator IC, LM7805. This integrated circuit provides a fixed output voltage of five volts for an input voltage range of 7 Volts – 35 Volts. Also, having a maximum current output of 1000milliampere far exceeds what the entire circuit required. The LM7805 has a quiescent current of 3mA. For a battery operated device that needs to be powered ON for at least twenty four hours, this quiescent current level is tolerable. The circuit diagram below shows the power supply section of the project. 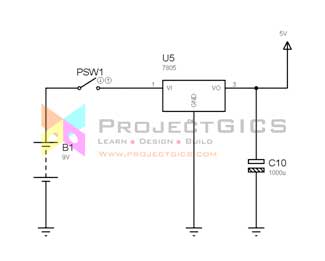 The power supply circuit is quite simplistic. This is typical of battery operated devices. Battery B1 is a 9V alkaline type battery. It’s the power source of the entire circuit hardware. PSW1 is a switch used to power on and off the device. U5 is the LM7805 five volts output voltage regulator. Capacitor C10 filters the output of the supply against voltage transients. 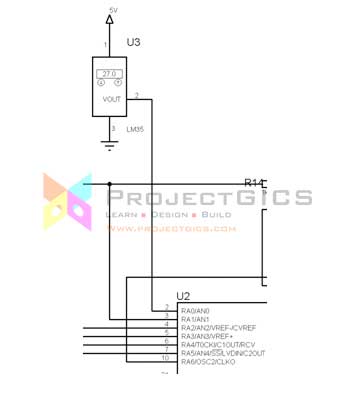 LM35 Connection to the MIcrocontroller 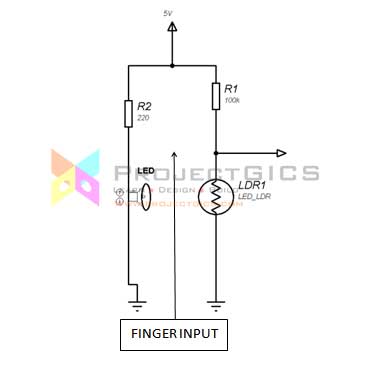 The combination of the LED and light dependent resistor (LDR) as depicted in the above circuit diagram allows for effective detection of the heart beat through the flow of blood in the body. The light emitting diode is of the high intensity type.It emits red light. Resistor R2, 220 Ohms provides the appropriate current level for the LED. High intensity light source is required to allow the light pass through the skin.The light dependent resistor detects light levels by the variation of its resistance in proportion to the amount of light incident on its surface. Since the resistance varies as light intensity on the surface of the LDR varies, we need to convert this resistance to voltage so it can easily be amplified. Resistor R1 (100K Ohms) together with the resistance of the LDR forms a potential divider. As a result, as the resistance of the LDR varies, the voltage across it varies as well. Appropriate placement of the LED and LDR is critical for the sensor to work. The LDR should be place directly under the LED. The LDR should be completely covered when a finger is placed else ambient light might saturate the LDR. The connecting wire shouldn’t be too long else the noise levels will be far higher than the heart beat signal. 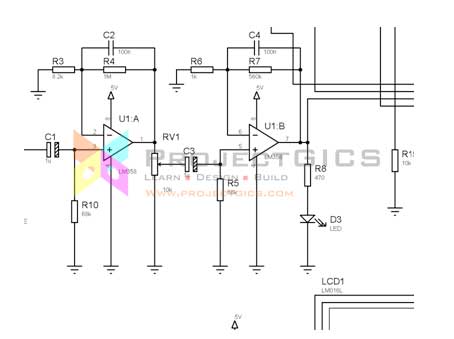 The heart beat pulses are very low frequency pulses, being able to amplify just these pulses will reduce the effect of noise signals on the system. In the end, only low frequency signals are amplified by the LM358 amplifiers while frequencies above 3Hz are attenuated.

Capacitors C1 and C3 are coupling capacitors. They only pass pulsing signals or alternating current signals while blocking the DC components. Potentiometer RV1 allows for the tuning of the amplification level.

A sixteen character, two line liquid crystal display is used as a visual display output for the project. The LCD display is based on the industry standard Hitachi HD44780 LCD driver integrated circuit. It is a parallel LCD, thus it works faster.

The LCD allows for an easy to use interface and menu system to be incorporated into the project. The standby screen for instance displays time of log, body temperature, log count, heartbeat rate and heartbeat pulse indication. 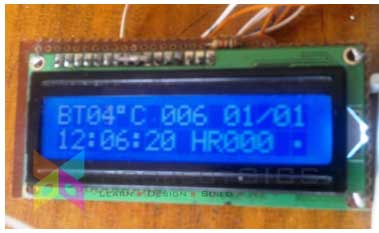 Standby screen of the project on an LCD

The addition of input buttons in the project completes the project as a mini computer having input, output and a CPU. In the case of the project, there are three push buttons. These push buttons have low switch bounce although switch debouncing is still implemented via software. Switch bounce or chatter is a term used to describe mechanical switches when they are pressed. To understand switch bounce, consider the illustration below: 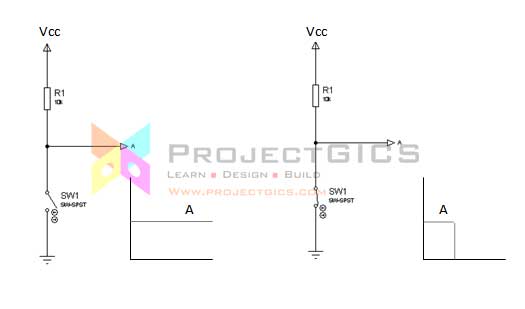 An ideal switch has no switch bounce 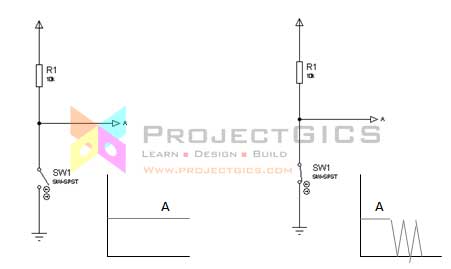 Like an ideal switch, when the mechanical switch is open, the output A is at Vcc potential. When it is closed, as shown on the image on the right, the output A oscillates before settling. This is known as switch bounce. Switch bounce, when neglected, poses a problem for digital circuits. A digital circuit can interpret the effect of switch bounce as multiple button presses. Switch bounce can be eliminated through hardware or software. Eliminating switch bounce through hardware involves connecting a capacitor and a resistor in form of an integrator across the output A. the time constant of the resistor and capacitor should be at least 10mS. If the time constant is high, the output A will be slow to respond to the switch. A monostable multivibrator of S-R flip flop can be used as well for hardware switch debouncing, but this might increase circuit complexity. When a microcontroller or microprocessor is used, it is best to implement switch debouncing through software. The software should poll the output A. once the output goes low, a delay is initiated. After the delay, which takes a few milliseconds, output A is polled again. If it is still low, then that’s a valid button press.

The PIC18F2550 has an impressive specification. It was designed with high level programming language like ‘C’ in mind. Thus it encourages the use of ‘C’ for its software development. Microchip technologies, the manufacturers of the PIC18F2550, have good software development tools which can be acquired easily from their website. All software coding of the project was done using Microchip MPLAB IDE (Integrated Development Environment) software. MPLAB, by default, allows for all microchip microcontrollers to be programmed using Assembly Language without any other application requirement. To program in ‘C’, a plugin application is required. In the case of the project, Microchip’s C18 was used. C18 allows higher end PIC microcontrollers (from ‘18’ series and above) to be programmed using native ‘C’ under MPLAB IDE. Using high level programming languages for the programming of the microcontroller allows for faster and flexible software development as opposed to using assembly language. In the project, The PIC18F2550 handles the conversion of the LM35 analog temperature data to digital, Pulse counting-for the calculation of the patient’s heart beat rate in BPM, Display of various information on the LCD, Checking for button pressed, and USB interfacing to a computer host. The figure below is part of the project hardware circuit diagram showing connections to the PIC18F2550 microcontroller. 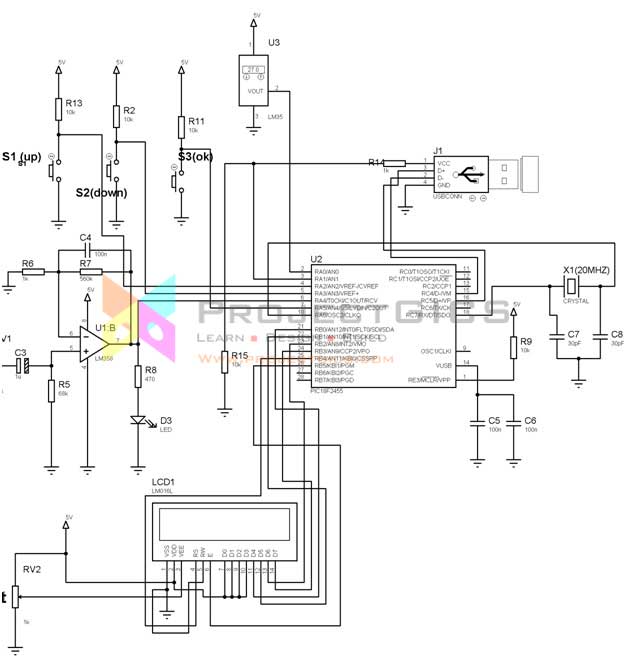 The project boasts of a USB interface. This allows the user to plug in the device into a computer host and read off logged body temperature and heart rate data in the device. In addition, a real time mode is also available. This mode of operation allows temperature and heart pulses to be sent to a computer host in real-time. The computer then computes the BPM from this data and also shows the instantaneous patient’s body temperature on the computer monitor. The USB interface feature is made possible as it is integrated into the PIC18F2550 microcontroller. Once the device is plugged, the computer host detects the presence of the device and asks for driver installation. Once the driver is installed, running the computer software program of the project completes the USB communication interface operation.

To allow for SMS notification in the project, a USB data MODEM was used. The MODEM used is the Huawei E380. Communication to the MODEM is done using ‘AT’ commands. ‘AT’ commands are a set of commands used mainly for modem control. With ‘AT’ commands, a lot of actions can be performed on a MODEM through software. Calls can be placed, SMS messages can be sent, received and displayed on a computer monitor, DATA communication is also possible.