The first discoveries of electricity was in the form of static electricity. Static electricity can easily be generated by rubbing certain materials together. Rubbing a material of silk against glass will produce static electricity. This is evident in the attraction of the silk material to glass material when both objects are brought close to each other. Hair Combs after used to dress/arrange hair also produces static electricity; this can be observed in the attraction of a piece of paper to the comb when brought in close proximity to the comb. Objects having static electricity are said to be statically charged. Statically charge objects can either have a positive or a negative charge but not both. When two objects are both statically charged and having equal positive charges or negative charges, a force of repulsion exists when both objects are brought close to each other. When the two objects are statically charged and have different charges i.e. one positive and the other negative, a force of attraction appears between the two objects when they are brought close to one another. If the two objects are equally charged and placed 1 Meter apart from each other such that the force of attraction or repulsion between the two objects is 9,000,000,000 Newtons (Unit of force), then these two objects are said to have 1 Coulomb of charge. Thus the unit of charge as regards to static electricity is the Coulomb. When working with electronic and electrical circuits, we deal less with charges but more on the flow of electrons. Electrons are related to charges in the sense that charges are basically electrons. In theory, A charge of 1 coulomb contains 6,250,000,000,000,000,000 electrons. A single electron has a charge of 0.00000000000000000016 Coulombs. This is known as an elementary charge. In electronic circuits, the flow of electrons from a power source such as a battery through various sections of the circuit, results in a current. The unit of current is the Ampere. A current of 1 ampere flows through a circuit when 1 Coulomb worth of electrons are flowing through the circuit per second.

The flow of electrons through a material is determined by the electronic characteristics of such a material. When we talk of the electronic characteristics of a material, we refer to the material’s characteristics at an atomic level. An atom, which is the smallest indivisible part of a material, is comprised of Protons, Electrons and Neutrons. The electron has a negative charge, the proton has a positive charge and the neutron has a neutral or no charge. Electrons can be easily displaced in an atom than protons or neutrons, and are more mobile. The level of freedom of a material’s electrons to movement determines the materials ability to allow electrons from a power source or battery flow through it, thus resulting in a current flow. Certain materials such as metals have majority of their electrons so loosely bound to their atoms that they can leave their respective atoms and move around other neighboring atoms. These electrons are known as free electrons. The higher the number of free electrons in a material, the higher the ability of such a material to permit current flow and thus the higher the electric conductivity. Materials with high number of free electrons are called conductors. They are used to channel current flow around an electric/electronic circuit. Other materials exist with very little electron freedom or mobility and therefore their electrons can’t move around neighboring atoms. These materials are called insulators and are used in electronic circuits where current flow is not required. Semiconductors fall in-between the electrical characteristics of conductors and insulators. at room temperature semiconductors have very little conductivity. Through a process known as doping, semiconductor materials can be made to conduct more of electrons or protons. This unique characteristic of semiconductors form the basis on which most active electronic components are built. 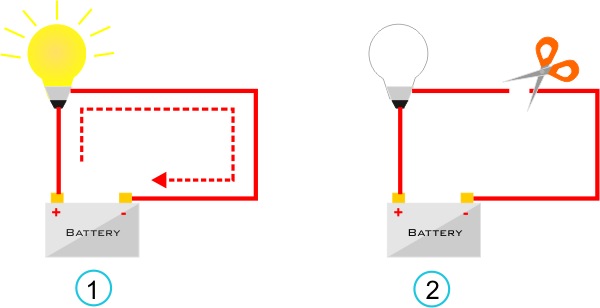 1. Current flow in a closed or continuous circuit. 2. An open circuit has no current flow.

Every electrical / electronic circuit or device requires a power source to function. It is the power delivered to the device from the power source that gets transformed in various ways by the device to perform the function of which it was built to perform. Every power source is made up of a voltage and current component. The voltage and current ratings of a power source will be finite quantities the power source is capable of delivering to a circuit or load (The term load is commonly used to depict any component that can consume power). The voltage of a power source provides the force required to push electrons through a circuit; thus creating current flow. To further make this point clear, consider an overhead tank filled with water and has one end of a pipe connected to the tank while the other end is terminated with a tap or valve that can allow water from the tank to be controlled when being fetched. This is illustrated in the picture below. 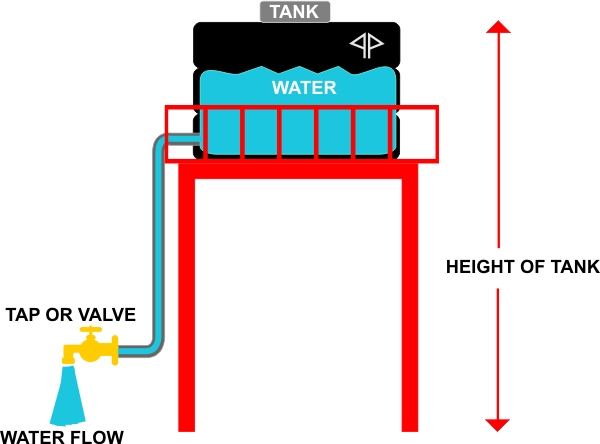 The water tank analogy used to explain the concept of voltage, current and resistance.

Using a water tank analogy as depicted here helps us understand the concepts of voltage and current. You may have seen this water tank arrangement. It is quite common in homes here in Nigeria. When the tap or valve is shut off, water does not flow. Opening the tap causes water to start flowing. The water flows through the tap as a result of pressure from gravity. The higher the tank above ground, the higher the pressure and the rate of flow of the water through the tap. This is quite similar to the behavior of voltage and current. The voltage in this case, is the pressure that causes the water to flow while the current is the water. The capacity of the tank determines how much water it can hold. This is also the case with a battery having a finite power capacity. By controlling the tap or valve, we regulate the rate of flow of water. In a circuit, a resistor performs the function of the tap. By using a resistor in a circuit, we can control the flow of current just like the tap controls the flow of water. we will study resistors in later topics. 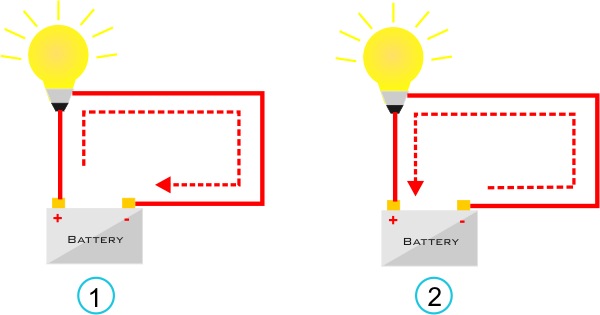