In many disciplines of science and engineering, very large and very small numerical quantities must be managed. Some of these quantities are mind-boggling in their size, either extremely small or extremely large. Take for example the mass of a proton, one of the constituent particles of an atom’s nucleus:

Or, consider the number of electrons passing by a point in a circuit every second with a steady electric current of 1 amp:

A lot of zeros, isn’t it? Obviously, it can get quite confusing to have to handle so many zero digits in numbers such as this, even with the help of calculators and computers.

Take note of those two numbers and of the relative sparsity of non-zero digits in them. For the mass of the proton, all we have is a “167” preceded by 23 zeros before the decimal point. For the number of electrons per second in 1 amp, we have “625” followed by 16 zeros. We call the span of non-zero digits (from first to last), plus any zero digits not merely used for placeholding, the “significant digits” of any number.

The significant digits in a real-world measurement are typically reflective of the accuracy of that measurement. For example, if we were to say that a car weighs 3,000 pounds, we probably don’t mean that the car in question weighs exactly 3,000 pounds, but that we’ve rounded its weight to a value more convenient to say and remember. That rounded figure of 3,000 has only one significant digit: the “3” in front—the zeros merely serve as placeholders. However, if we were to say that the car weighed 3,005 pounds, the fact that the weight is not rounded to the nearest thousand pounds tells us that the two zeros in the middle aren’t just placeholders, but that all four digits of the number “3,005” are significant to its representative accuracy. Thus, the number “3,005” is said to have four significant figures.
In like manner, numbers with many zero digits are not necessarily representative of a real-world quantity all the way to the decimal point. When this is known to be the case, such a number can be written in a kind of mathematical “shorthand” to make it easier to deal with. This “shorthand” is called scientific notation.

With scientific notation, a number is written by representing its significant digits as a quantity between 1 and 10 (or -1 and -10, for negative numbers), and the “placeholder” zeros are accounted for by a power-of-ten multiplier. For example:

10 to the 18th power (1018) means 10 multiplied by itself 18 times, or a “1” followed by 18 zeros. Multiplied by 6.25, it looks like “625” followed by 16 zeros (take 6.25 and skip the decimal point 18 places to the right). The advantages of scientific notation are obvious: the number isn’t as unwieldy when written on paper, and the significant digits are plain to identify.

But what about very small numbers, like the mass of the proton in grams? We can still use scientific notation, except with a negative power-of-ten instead of a positive one, to shift the decimal point to the left instead of to the right:

10 to the -24th power (10-24) means the inverse (1/x) of 10 multiplied by itself 24 times, or a “1” preceded by a decimal point and 23 zeros. Multiplied by 1.67, it looks like “167” preceded by a decimal point and 23 zeros. Just as in the case with the very large number, it is a lot easier for a human being to deal with this “shorthand” notation. As with the prior case, the significant digits in this quantity are clearly expressed.

Because the significant digits are represented “on their own,” away from the power-of-ten multiplier, it is easy to show a level of precision even when the number looks round. Taking our 3,000 pound car example, we could express the rounded number of 3,000 in scientific notation as such:

If the car actually weighed 3,005 pounds (accurate to the nearest pound) and we wanted to be able to express that full accuracy of measurement, the scientific notation figure could be written like this:

Since there would be no point in adding extra zeros to the right of the decimal point (placeholding zeros being unnecessary with scientific notation), we know those zeros must be significant to the precision of the figure.

The benefits of scientific notation do not end with ease of writing and expression of accuracy. Such notation also lends itself well to mathematical problems of multiplication and division. Let’s say we wanted to know how many electrons would flow past a point in a circuit carrying 1 amp of electric current in 25 seconds. If we know the number of electrons per second in the circuit (which we do), then all we need to do is multiply that quantity by the number of seconds (25) to arrive at an answer of total electrons:

Using scientific notation, we can write the problem like this:

However, if we want to hold to standard convention for scientific notation, we must represent the significant digits as a number between 1 and 10. In this case, we’d say “1.5625” multiplied by some power-of-ten. To obtain 1.5625 from 156.25, we have to skip the decimal point two places to the left. To compensate for this without changing the value of the number, we have to raise our power by two notches (10 to the 20th power instead of 10 to the 18th):

What if we wanted to see how many electrons would pass by in 3,600 seconds (1 hour)? To make our job easier, we could put the time in scientific notation as well:

To illustrate how division works with scientific notation, we could figure that last problem “backwards” to find out how long it would take for that many electrons to pass by at a current of 1 amp:

Just as in multiplication, we can handle the significant digits and powers-of-ten in separate steps (remember that you subtract the exponents of divided powers-of-ten):

And the answer is: 0.36 x 104, or 3.6 x 103, seconds. You can see that we arrived at the same quantity of time (3600 seconds). Now, you may be wondering what the point of all this is when we have electronic calculators that can handle the math automatically. Well, back in the days of scientists and engineers using “slide rule” analog computers, these techniques were indispensable. The “hard” arithmetic (dealing with the significant digit figures) would be performed with the slide rule while the powers-of-ten could be figured without any help at all, being nothing more than simple addition and subtraction.

The metric system, besides being a collection of measurement units for all sorts of physical quantities, is structured around the concept of scientific notation. The primary difference is that the powers-of-ten are represented with alphabetical prefixes instead of by literal powers-of-ten. The following number line shows some of the more common prefixes and their respective powers-of-ten: 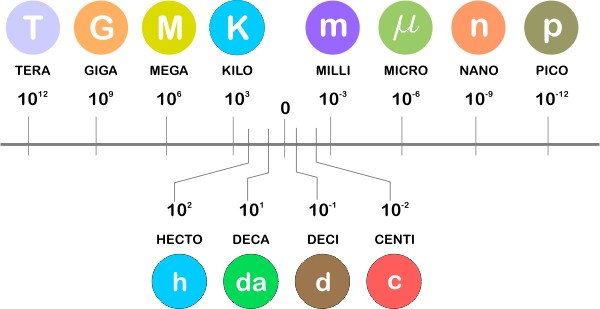 Illustration of the metric prefix scale

Because the major prefixes in the metric system refer to powers of 10 that are multiples of 3 (from “kilo” on up, and from “milli” on down), metric notation differs from regular scientific notation in that the mantissa can be anywhere between 1 and 999, depending on which prefix is chosen. For example, if a laboratory sample weighs 0.000267 grams, scientific notation and metric notation would express it differently:

The same figure may also be expressed as 0.267 milligrams (0.267 mg), although it is usually more common to see the significant digits represented as a figure greater than 1.

In recent years a new style of metric notation for electric quantities has emerged which seeks to avoid the use of the decimal point. Since decimal points (”.”) are easily misread and/or “lost” due to poor print quality, quantities such as 4.7 k may be mistaken for 47 k. The new notation replaces the decimal point with the metric prefix character, so that “4.7 k” is printed instead as “4k7”. Our last figure from the prior example, “0.267 m”, would be expressed in the new notation as “0m267”.

To express a quantity in a different metric prefix that what it was originally given, all we need to do is skip the decimal point to the right or to the left as needed. Notice that the metric prefix “number line” in the previous section was laid out from larger to smaller, left to right. This layout was purposely chosen to make it easier to remember which direction you need to skip the decimal point for any given conversion.

From UNITS to micro on the number line is 6 places (powers of ten) to the right, so we need to skip the decimal point 6 places to the right:

From the (none) place to kilo place on the number line is 3 places (powers of ten) to the left, so we need to skip the decimal point 3 places to the left: 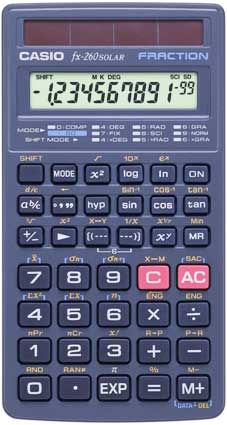 To enter numbers in scientific notation into a hand calculator, there is usually a button marked “E” or “EE” or “EXP” used to enter the correct power of ten. For example, to enter the mass of a proton in grams (1.67 x 10-24grams) into the hand calculator shown above, I would enter the following keystrokes:

The [+/-] keystroke changes the sign of the power (24) into a -24. Some calculators allow the use of the subtraction key [-] to do this, but I prefer the “change sign” [+/-] key because its more consistent with the use of that key in other contexts.

If I wanted to enter a negative number in scientific notation into a hand calculator, I would have to be careful how I used the [+/-] key, lest I change the sign of the power and not the significant digit value. Pay attention to this example:

Displaying metric and scientific notation on a hand calculator is a different matter. It involves changing the display option from the normal “fixed” decimal point mode to the “scientific” or “engineering” mode. Your calculator manual will tell you how to set each display mode.

These display modes tell the calculator how to represent any number on the numerical readout. The actual value of the number is not affected in any way by the choice of display modes—only how the number appears to the calculator user. Likewise, the procedure for entering numbers into the calculator does not change with different display modes either. Powers of ten are usually represented by a pair of digits in the upper-right hand corner of the display, and are visible only in the “scientific” and “engineering” modes.

The difference between “scientific” and “engineering” display modes is the difference between scientific and metric notation. In “scientific” mode, the power-of-ten display is set so that the main number on the display is always a value between 1 and 10 (or -1 and -10 for negative numbers). In “engineering” mode, the powers-of-ten are set to display in multiples of 3, to represent the major metric prefixes. All the user has to do is memorize a few prefix/power combinations, and his or her calculator will be “speaking” metric!