A digital clock that uses a LED dot matrix display to show the current time and temperature in a captivating way. Users can set time using push buttons. An inbuilt battery ensures that even when power goes off, time is still maintained. Ambient temperature is displayed on the LED matrix in centigrade or Fahrenheit.

Light Emitting diodes have been around for some years now. Advances in technology have now made it possible for Light Emitting diodes to transform from devices earlier used as indicators due to their low light output to devices that can be used for lighting. Today, light emitting diodes are so bright with high lumen output that they can be used for virtually any kind of application. In this project, We use a number of high lumen light emitting diodes arranged in a dot matrix format to show the current time and ambient temperature. Due to the high lumen output of the LEDs, the display can be used both indoors or outdoors.  Working on the strength of a microcontroller (PIC16F873) and other components such as serial registers, transistors, temperature sensor integrated circuit; we are able to build a complete display system that can display the time of day and temperature, as well as allowing users to interact with it to set the time. 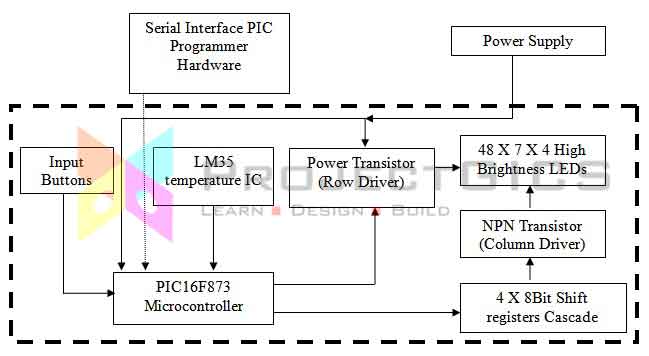 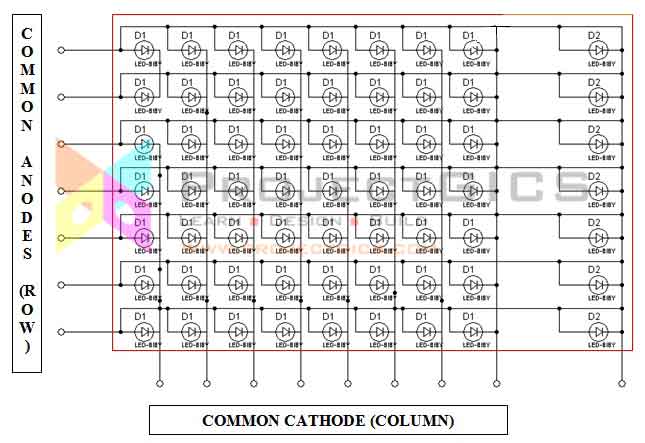 Arrangement of LEDs in a dot matrix display connection

The arrangement of the LEDs allows for random access to any led on the matrix. Each LED or pixel has an address that can be accessed by the microcontroller through a shift register cascade. By accessing several of the LEDs at a speed that is fast enough for the eye to notice, we can create the illusion of a steady display. This is known as persistence of vision.